Worms Armageddon is an Action, Strategy and Platformer game for PC published by Team17 Digital Ltd in 1999. Ready to enter worms’ battlefield?

Pick your worm to equip it with lots of dangerous weapons such as RPG! You can also experience these battles with your friends in LAN or Online Multiplayer. 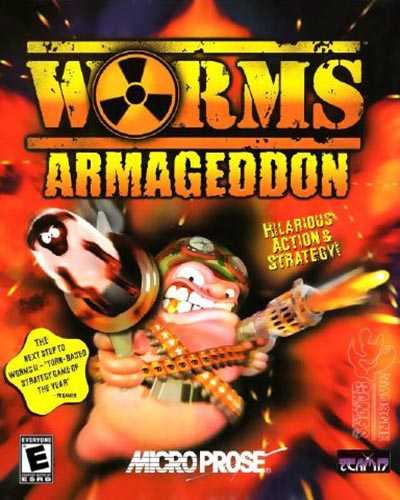 Those intrepid invertebrates return with a vengeance in the much-loved Worms™ Armageddon. It’s a whole new can of worms! It’s hilarious fun that you can enjoy on your own or with all your friends. Worms Armageddon was the stand-alone expansion to arguably the best artillery strategy ever made… Worms 2. Though it lacks the insanely tweakable ammo and game settings of the original and doesn’t have boobytrapped crates, WA is the best iteration in the series.

Especially given that it’s playable on modern Windows systems since the 3.16 patch. Forget Reloaded and other new Worms games: this game delivers everything you’ld want in almost perfect style. Thing is: you could get really good at it.

It allows a great deal of skill development and at the same time, it’s a very capable strategy in its own right. Figure out your own style of play: very creative or very effective. Mass damage or darksiding!