Urban Cards is an Action, Adventure, and Strategy game for PC published by Hues Games in 2021. This game is just awesome!

You will start your ascent from game to game a bit like a “Slay the spire”, but with a choice of 3 possibilities of which only 2 can be played. 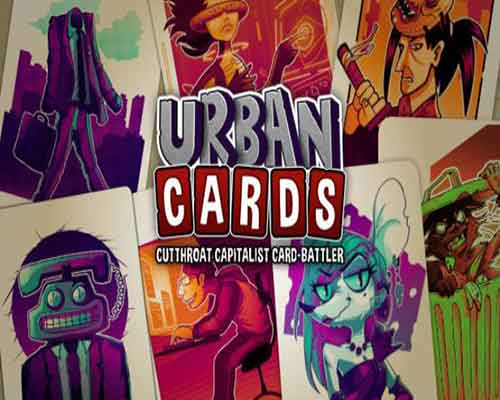 Your artefacts (bonus) and therefore 3 cards representing or a game to be played with indicated on the card the enemy faction, the sum to be reached first, and the number of cards to be won at the end of the game (which you will have to buy), or an event, a shop, a trade and debt (redemption of your debt and exchange of cards for others), then after a while the end boss, and we start a new year that will be harder than the previous one.

A game will proceed as follows: on a board of 3 squares representing a street, you have your opponent in front, a square on the left at the bottom where we see your faction, your remaining cards to draw, those discarded, your income by turns, your bonuses (artifacts), and your money and debt; this box will be on the right at the top for your opponent.

You will therefore need to quickly expand your deck, which is done during victories, choosing “Shop” or “event” or even “Trade and debt”.