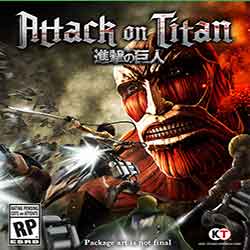 Attack on Titan AOT Wings of Freedom is an Action, Adventure, and RPG game for PC published by KOEI TECMO GAMES CO., LTD. in 2016.

Being a fan of the manga, the first surprise is the follow-up of the origin story quite faithfully, with some flashbacks to get a glimpse of the first moments of the manga when Eren and Misaka are younger.