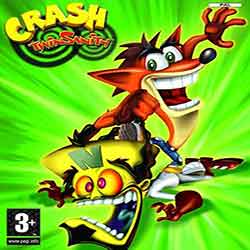 Crash Bandicoot Twinsanity 3D is an Action, Adventure, and Open World game for PC published by Vivendi Universal Games in 2004. The eleventh game in the Crash Bandicoot series!

Crash Twinsanity differs significantly in gameplay from its predecessor Crash Bandicoot: The Wrath of Cortex. The game is largely played in a freely spacious style, and the plot is now pushed forward by going through levels, instead of collecting crystals.