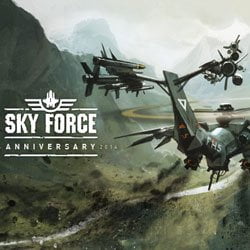 Sky Force Anniversary is an Action and Arcade game for PC published by Infinite Dreams in 2015. Get ready for battles and save the world!

After passing about 10 years from the first version, Developers decided to make a remaster of it at 2014. High resolution with details would be awesome.