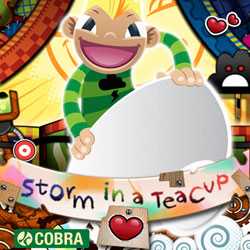 Storm in a Teacup is a Causal, Adventure and Platformer game for PC published by Cobra Mobile in 2012. Control Storm on his teacup!

He wants to have an enjoyable adventure on his teacup. But there are lots of problems which may harm this little boy’s life badly.