Strip 4 Classmate Study is an Adventure, Casual and Simulation game for PC published by 11/10 games in 2020. Play with a school girl!

The game is a real-life simulation of a schoolgirl, whom you are in her house to study for an exam with. And as she gets tried, she asks to play. 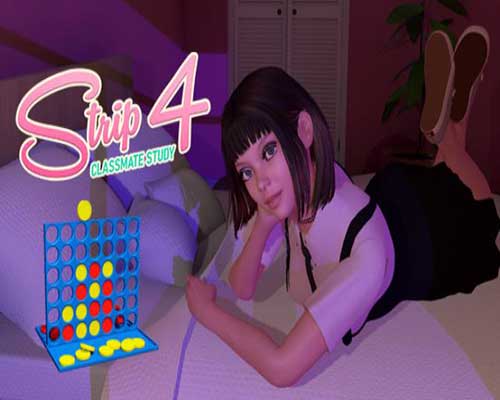 Four in a row or Connect four with a cute doll ready to undress in case of loss. The game has the ability to enter a code that removes underwear. We throw chips in the grid in turn with the beauty. The winner is the one who collects a line or diagonal of 4 chips of his color. The mechanics are a bit like tic-tac-toe.

The game is simple, there is a mathematical algorithm that determines the winner right at the start (you just need to play wisely and not be stupid). If the first player throws a chip in the column in the middle, then he will win, if the first chip is thrown in the columns adjacent to the middle, then there will be a draw, and if in one of the four extreme columns (two extreme columns on the right and left), he will win the opponent.

If you beat the doll, then it takes off part of the clothes: a dress, a tie, and then a blouse and remains in transparent underwear. To remove it, in the main menu you need to enter the code “cansee” or “senpai” without quotes. Lingerie will disappear, but total nudity disappoints. At the moment, the textures of the chest are not bad, but the lower part is like a doll (there are no details, one plane).