Steampunk Tower 2 is an Action and Strategy game for PC published by DreamGate in 2018. The gigantic robots should be destroyed!

They will attack your basement a lot. You should defend it against robots. 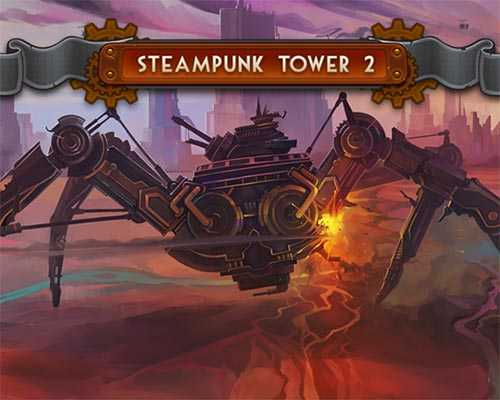 Steampunk Tower 2 is a unique action-strategy game set in the alternative Steampunk universe. There is a dragged-out world war with the enemy never seen before. Lord Bingham is coming back to the world arena and he needs a skilled commander.

STEAMPUNK TOWER 2 is an action / strategy game where you take command of Lord Bingham’s flying fortress and its battle tower in an epic campaign throughout Europe against the force of the Cult. At first, you’ll have a small train station, a few residential areas and an armoury at your disposal, as well as a few free lots where you’ll be able to build new structures when you have enough resources in your coffers. It will always cost you Etherium to build or upgrade your structures within the base, in addition to a few extra requirements, such as acquiring a certain number of components and a higher level of experience, which you’ll receive by defeating the enemy in battles.

It will also cost you a certain number of Etherium to purchase turrets, but you will need to gather components and income in order to upgrade your turrets and your battle tower.