PAKO 2 is a Racing, Action and Casual game for PC published by Tree Men Games in 2017. Take the roll of a crazy driver on the roads.

There are no rules for you as a driver in this game. It’s the time to drive as fast as you can to avoid the police drivers on your way. 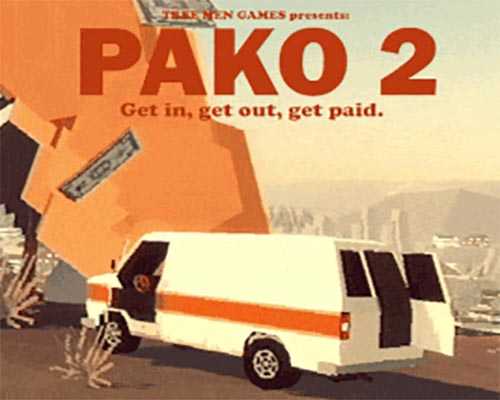 PAKO 2 is an arcade driving game where you explore vast cities as a getaway driver, perform robberies with your crew and shoot twin-stick style while escaping the law. Successful getaways reward you money which can be used to buy upgrades, guns, items, new rides and locations.

The core gameplay revolves around picking up crews from jobs they just pulled, and getting them to their drop-off location, all while avoiding the ever growing police threat that manifests itself in increasingly more dangerous ways. The game may sound simple, but it’s all the extra trappings that push this one well ahead of it’s competition.

An entire lot of cars to buy with in game cash, tons of weapons to purchase that give this title it’s twin stick elements, mods that can be installed, a perk system that can be customized and earned through each successful drop-off, stat boosting for each vehicle, multiple levels! The list goes on and on for ways that you can customize your own experience and style in this game. Even the graphic options shine here, with the ability to make the game look like a 70’s VHS cop show, or if you prefer, clean up the visuals with a more “modern” look.