Foreign Legion Buckets Of Blood is an Action, Adventure, and Shooter game for PC published by Sakari Games in 2009. Shoot faster!

The game is a casual third-person shooter and is intended for short runs when you need to keep yourself busy. 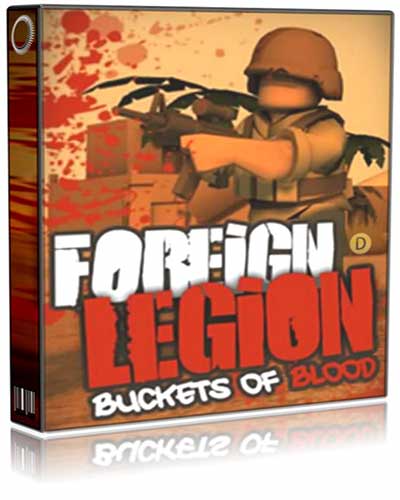 The graphics, even if they do not shine with millions of polygons per soldier’s head and Ultra HD textures, are somehow attractive. Made with high quality, it looks good. The cartoon style gives this game a charm. But even more, it gives the sea of ​​blood on the screen.

Customization for the character looks, albeit primitive, but it is here and for this game more is not required of it – change the color of the soldier’s uniform and helmet, the color of the skin, and stick-on accessories.

The arsenal is extensive here. From pistol to six-barreled, from shotgun to sniper rifle. It opens depending on the level of the character and is bought for in-game currency in the main menu. A variety of weapons and cards is enough to kill 15-20 minutes more than once in this game. You can really return to the game an unlimited number of times, enjoying the simple gameplay for a short time. The point is to defend something and attack someone.