Gathered all of FIFA masterpieces from the old times to enjoy and bring back those good old days playing behind the consoles. 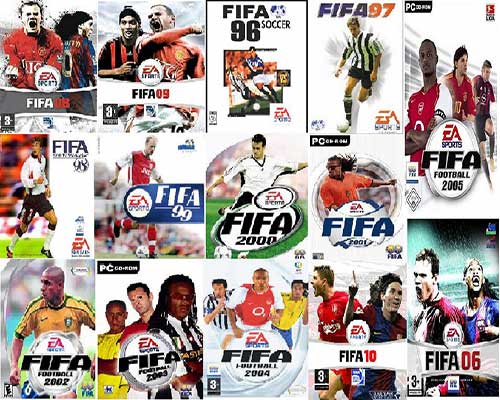 The key to the success of the first FIFA was the isometric view of the playing field (when all other games used vertical or “Birdeye” views), detailed graphics and animations and of course, FIFA approval (although, despite this approval, the real names of the players could not be adopted). The product was presented for Christmas 1993 under the name “FIFA International Soccer” and was compatible with the major active platforms of the time (both console and PC). The following year’s edition, FIFA Soccer 95, didn’t add much except the ability to use clubs.
FIFA Soccer 96 revolutionized the series: for the first time in the game the real names of the players appeared; for the PC, 32X and Sega Saturn this version used the Virtual Stadium (with which the players moved against a three-dimensional background). In FIFA 97 polygonal models were used as a basis for creating players and the “indoor soccer” game mode was introduced for the first time.
The peak was reached with FIFA: Road to World Cup 98. This version included a complete edition of the World Cup, including qualifications (including all the national teams registered for FIFA), and the game system had been vastly improved. Months later, “World Cup 98”, the first officially licensed EA tournament, had improved graphics support (3dfx and, via patch, Direct3D); in addition, each team was equipped with its own official uniform (except those of the goalkeepers, who were generic uniforms).