FIA European Truck Racing Championship is an Racing, Simulation and Sports game for PC published by Bigben Interactive in 2019.

There is a main race in qualifying order and a reverse grid 2nd race which means there is plenty of racing action to be had. 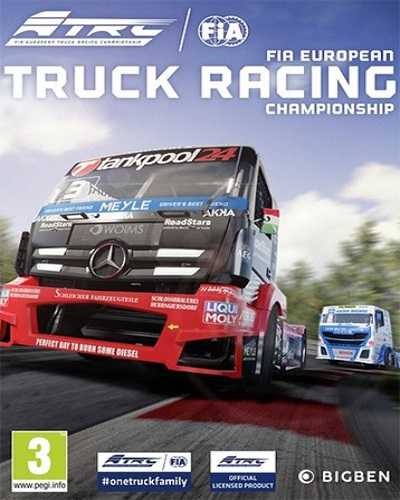 The European Truck Racing Championship is one of the most spectacular and challenging motor racing competitions.  The driving difficulty and many unique race features have been faithfully reproduced with the KT Engine (WRC).
In ETRC, like on real-life race tracks, you need to control the temperature of your brakes so they don’t overheat. You must also consider the weight of the truck when cornering, monitor tyre wear and find the best tactics for overtaking.

First impressions, the good stuff: Size and weight. Immediately and in real contrast to the usual car racing games the size and weight of these trucks is transmitted superbly, they feel big, slow to react and momentum is key. This is much better than the Mercedes Truck in Forza 7 which feels like an on stilts version of the Forza cars. Even the Automobilista trucks rev and drive like cars in comparison to the way the FIA Truck Racing trucks feel. These trucks handle differently to anything I’ve tried before.