Blamdown Udder Fury is an Action and Adventure game for PC published by Guru Games in 2016. Can you control a cow with a bazooka!?

She wants to make a big revenge on the cruel people with the special weapons. But the enemies are much more than what she thinks in the city. 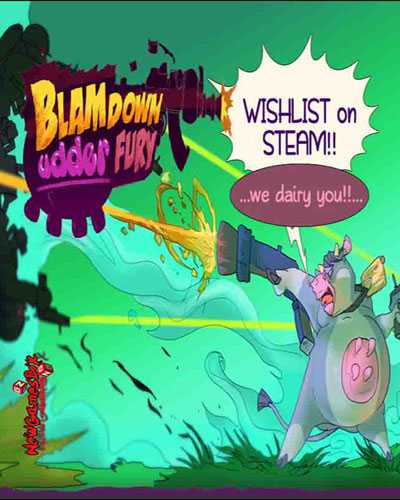 This game is about a love story about two cows named Moonalisa and Rosa. They felt in love before the enemies separated them cruelly. The hungry farmer did this to you. He wanted to make a big hamburger out of the cows! That’s why you have become mad. When you decided to destroy anything in the city because of that, The police forces appeared. Now, You have to remove the areas from the enemy forces to get high scores. Hundreds of enemies are waiting for you!

All of the buildings in the city are desctructible. You’re free to blow up anything that you want to gain scores in Blamdown Udder Fury. There are different kinds of game modes like survival mode to defeat the enemies in them. The players just need to choose one of the modes to become a killer cow in a crowded city! Don’t miss the challenges too. You should never forget an important sentence in this action adventure game; “Meat is a murderer”

Your main goal is to kill all of the meat eaters in the town. Can you reach this goal by playing as a mad cow? It’s the time to experience Blamdown Udder fury to defeat the cruel humans who have killed your friends before!