Artificial Defence is an Action and Strategy game for PC published by ONEMANGAMES in 2016. Ready to rescue your operating system?!

Millions of creeps are attacking your valuable operating system (OS). You have to take care of main parts of OS to reach the higher levels. 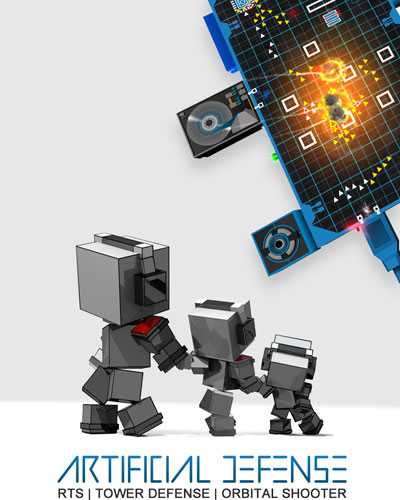 Some robots will help you on this important duty of this enjoyable game. Lots of equipment can be used for defense. But you should get all of them one by one on the store. When you reach a successful defense, Some scores get added to your account. You can customize your defender robots too. When their abilities get improved, They can defend much better than before. Some of them need to be repaired after the battles. You should pay for their repairing.

There are many modern weapon like miniguns and hellfire missiles at Artificial Defence. All of these weapons’ levels can be upgraded too. If you want to have a great defending plan, You will need special towers. When you build a tower, It can make tons of damages on the invaders. The players have to take care of these towers so much. Because they can increase win-rate as well. If you’re ready to have a modern war with the little robots, Don’t miss the time. You can reach the higher levels by saving the time. So, Play faster and finish the missions as fast as you can at Artificial Defence.

This title can be challenge your mind so much. The main operating system needs you as a hero! Artificial Defence also includes thirteen soundtracks that can make the gameplay much enjoyable.